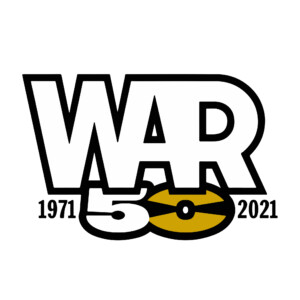 WAR Will Also Debut Newly Restored High-Definition Music Videos Of Some Of Their Biggest Hits Including 4K Videos Of “Why Can’t We Be Friends?” And “Low Rider” Out Today

LOS ANGELES – WAR burst onto the scene 50 years ago, capturing the heart and soul of America’s streets with its righteous, multi-cultural sound on hits like “Why Can’t We Be Friends?” “Low Rider” and “The Cisco Kid.” Avenue/Rhino is kicking off a year-long anniversary celebration that will begin with the introduction of a new colored-vinyl boxed set for Record Store Day and new 4K videos available via WAR’s YouTube channel, www.youtube.com/war.

Coming on the heels of the recently sold-out Greatest Hits album released during last year’s Record Store Day Black Friday event, Avenue/Rhino will showcase one of the group’s most-prolific periods with a new boxed set. The set includes five LPs pressed on color vinyl, including War (1971); All Day Music (1971); The World Is A Ghetto (1972); Deliver The Word (1973); and Why Can’t We Be Friends? (1975) and will be limited to 5,000 copies.  WAR – THE VINYL 1971-1975 will be released on July 17 exclusively for Record Store Day 2021 for $109.98 at participating retailers.

“Our music came from the street and the challenges that everyday people struggle with, says founding member Lonnie Jordan. “We expressed the pleasures and pains of those experiences which we are still confronting all these years later.”

The collection brings together some of WAR’s most-popular records, including its three consecutive #1 R&B albums: The World Is A Ghetto (Billboard’s best-selling album of 1973), Deliver The Word, and Why Can’t We Be Friends?”. To date, the group has earned 17 gold, platinum, or multi-platinum albums and is reaching new milestones across all digital streaming platforms.

The set also encompasses many of WAR’s biggest hits. Among the 35 tracks are gold-certified singles like “Slipping Into Darkness,” “The World Is A Ghetto,” and “The Cisco Kid.” Another gold single – “Why Can’t We Be Friends?” – stayed on the charts for 31 weeks and became the soundtrack to the US-Soviet space mission in which astronauts and cosmonauts linked up in the spirit of friendship. It has now been streamed more than 100 million times. Also included in the set is the #1 R&B smash “Low Rider,” which was inducted into the GrammyÒ Hall of Fame in 2014.

WAR Producer Jerry Goldstein states, “Making these records was like one big street party.  Everyone was invited and brought something different musically. Editing these sometimes 20 minute jams into records was a struggle but well worth the labor.”

As part of the anniversary festivities, WAR has debuted two new 4K high-definition versions of their classic music videos on their YouTube channel for “Why Can’t We Be Friends?” and “Low Rider.” The restored innovative videos which pre-date the MTV era capture the band’s roots and spirit.  “Low Rider” features Southern California’s unique and cherished car culture while “Why Can’t We Be Friends?” displays WAR’s good-humored commentary on serious social issues.  Click here to watch now.

For more than a decade, WAR’s exhilarating sound spoke to millions of Americans about the troubled times of Vietnam, Watergate, racial strife, and the tensions of the inner cities. The actively touring band is celebrating its 50th anniversary in 2021 with a legacy that is still growing as its music inspires a new generation with a revolutionary sound that continues to transcend shifting tastes and styles. WAR will continue the celebration with a series of vinyl releases to be announced later this year, and content will continue to expand in the coming months.