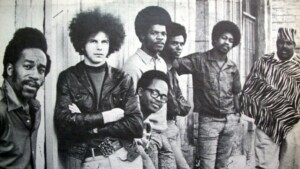 Rhino was previously the home of the Avenue catalog from 1992-2010.

To coincide with the announcement, Rhino will release a gold-vinyl version of WAR’s 1976 Greatest Hits on November 27 for Record Store Day’s Black Friday Event.

Limited to 5,500 copies and sourced from the original masters, the compilation has not been available since its original release.

The group was created in the late 1960s by producer/songwriter Jerry Goldstein and British singer Eric Burdon, who was then living in Los Angeles after several years with The Animals.

Goldstein spotted the musicians who would become WAR playing clubs in LA. Soon after, Burdon started playing shows with the band.

Originally billed as Eric Burdon and WAR, the group would record two albums together: Eric Burdon Declares “WAR” (which featured the hit Spill The Wine) and the double album, The Black-Man’s Burdon.

After Burdon left the group in 1971, the band shortened its name to WAR and achieved gold-certified hits like Slippin’ Into Darkness, The World Is A Ghetto, Why Can’t We Be Friends? and The Cisco Kid, as well as the No.1 R&B smash Low Rider.

The band truly had three consecutive No.1 R&B albums: The World Is A Ghetto (Billboard’s best-selling album of the year 1973), Deliver The Word, and Why Can’t We Be Friends?.

WAR is celebrating their 50th anniversary in 2021.

On Avenue and WAR’s return to Rhino, Jerry Goldstein said: “We’re really excited to be back home at Rhino.

“Mark and the team truly love music, and we look forward to spectacular re-issues and digging deep into our vast archives to polish and release some long-hidden gems together.”

Rhino President Mark Pinkus, said: “I could not be happier to announce Avenue Records’ return to Rhino.

“I had the pleasure of working with Jerry Goldstein and Glenn Stone on many incredible projects in their previous time with us and know we will achieve even greater heights with this new partnership.

“WAR’s music continues to endure 50 years later, and I look forward to perpetuating their incredible legacy with great releases while also connecting the band’s legendary catalog of hits with new fans around the world.”